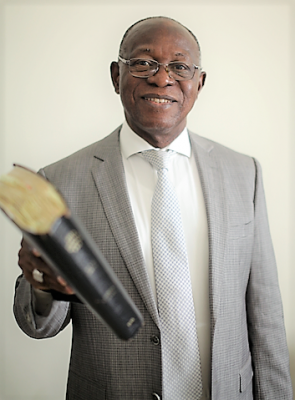 A Veterinary Surgeon, he is the Planter and Overseeing Pastor of all the Word and Power Assembly churches and also the Lead Pastor of the Dubai church.

He was commissioned into missionary work in Umuahia, Nigeria in April 1999 by the Very Rev.(Dr) J.N Nwakanma and Rev JOHN Okposio; and in September of the same year, he relocated to and has been based in DUBAI, in the UNITED ARAB EMIRATES where he has done a great ‘spiritual grounds-breaking’ work for the harvest of the ripe field of the Middle East and Asia. He became the very first Nigerian to begin and plant a full church – Word & Power Assembly, out here in DUBAI.

Dr. Ndukwe is an Apostolic Evangelist, a Church Planter, a Pastor, an anointed Teacher and Preacher of the Gospel of Jesus Christ with exceptional Prophetic Unction, and truly has the ‘Word For Now’ for every situation. His person and personality exudes the aroma of the manifestations of God’s kind of love. His ministry is graced by his radical stand for Jesus Christ and known for its standard of “Preaching the Word of God ‘pure and Unadulterated’ … in demonstration of the Spirit and of power, … so that the faith of men will not be on the enticing words of man’s wisdom, but in the power of God!

His ministry runs on the “wheels”

He is a vivid, anointed and powerful speaker in church meetings and conventions, Crusades and Outreaches both in the UAE where he currently resides, in Nigeria where he hails,in India subcontinent where he has an on-going extensive missionary work and also abroad wherever he visits. His messages are timeless truths, very direct, expositional, practical, eye–opening, impacting, Life-transforming, full of the wisdom of God, very productive and results – oriented! You don’t need a theology degree to grab or grasp it!

Dr. Ndukwe’s life & ministry has not just touched but has transformed, re-livened, re-ordered, reformed and re-directed many lives; it is still doing the same … as the Unchangeable Changer – the Almighty God, has been faithfully rebuilding the waste places in peoples’ lives and situations. And the power of the Spirit of God in healings, miracles, reconciliations to God through Christ with ‘all-round’ restorations, etc. etc is evident in all his ministry, ministering & ministrations.

Testimonies ABOUND of transformation of lives, of deliverances from Demonic attacks and possessions, of miraculous healings from cancer, heart & various other diseases; of barrennesses turned into fruitfulness, … and of many other conditions.

But besides these visible human changes and various progresses in and through God’s Word, seen especially in WAPA Members, remarkable transformational impact of his “Grounds-breaking apostolic ministry & prophetic unctions” is very evident in the land of UAE also. The spiritual cloud re-ordering & transformation into spiritual freedom in UAE exists now for anybody (who knew) to see and feel; the general elevations in life, lifestyles & living standards are without doubts its manifestations, … and the physical transformations as evident in the recent majestic developments in the emirates of Dubai, Sharjah, Abudhabi, Fujairah and Ras Al Khaima where OUR prayerfully planted assemblies exist is not co-incidence, but prophetic incidences! We are still working … …

Dr Ndukwe is married to Odochi Nneamaka. They are blessed with these assets – seven ‘arrows’ as children (a.k.a ‘The Covenant Kidz’), one ‘peculiar’ son-in-law and one ‘crown’– Siri Adaeze their first granddaughter! In ministry, he works very closely with his ‘asset-family’. Recently, through his newly founded ‘Missionary Alliance Network’, they are networking with other ministers and full gospel churches to engage in ‘Grounds-breaking’ missionary activities and to sensitize youths, men and women to reach the unreached humans and areas especially in the Middle East & Asia. Through this networking so far, he sees new churches being planted …. …. !